The Public Policy Institute of California (PPIC) released a further report this week surveying Californian’s perspectives on, and support for, hydraulic fracturing, or fracking, in the state. The report, entitled “Californians and the environment” (pdf), is PPIC’s 13th annual survey on the environment. We reported on last year’s report (pdf) here. The report includes findings on:

Climate change, including perceptions of global warming’s onset and concerns about its possible impacts; preferences for AB 32 and views of the impact of state action on global warming on employment; views on ways government can regulate emissions, including setting stricter emissions limits on power plants; and preferences for how to spend cap-and-trade revenues. It also measures attitudes toward energy policy, including fuel economy standards, oil drilling, nuclear plants, renewable energy, the Keystone XL pipeline, and fracking.

On the first question, PPIC reported the following responses from the 2,103 Californians surveyed:

Comparing a comparable question in last year’s survey (“do you favor or oppose fracking in California?”) reveals possible minor changes in attitudes about fracking among Californians. The percentage favoring fracking decreased from 42% in 2012 to 35% in 2013, while those opposed increased from 46% in 2012 to 51% in 2013. Factoring in party affiliation, the findings show that in 2012, 65% of Democrats opposed the practice, with only 22% in favor. In 2013, those numbers shifted to 60% opposed and 30% in favor. Among Republicans, the numbers shifted from 64% in favor and 22% opposed in 2012, to 49% in favor and 35% opposed in 2013. Of course, these differences may be explained by the subtle, but important, distinction in the phrasing of the question. In 2012, the question was simply whether the respondent favored or opposed fracking in California. In 2013, the question focused more narrowly on the increased use of fracking in the state. Thus, comparing the results from year-to-year may lead to inaccurate conclusions. It would be interesting to see what the results would have have been had PPIC asked the identical question in both surveys.

On the second question, the survey found that 50% of California favor increased regulation of fracking, 36% oppose, and 13% do not know, as shown in the following pie chart: 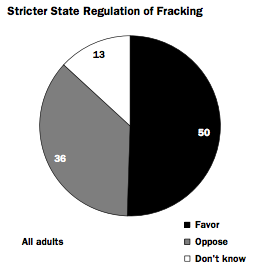 Regulation of fracking in California appears to be a certainty, with formal rulemaking expected to begin in the coming weeks. See our recent analysis of the status of California’s rulemaking efforts here.

The PPIC report is not limited to fracking issues. Among other environmental issues, the report summarizes its findings on climate change and energy policy as follows: