PPIC Study Evaluates Californians’ Knowledge of and Attitudes Toward Fracking

The Public Policy Institute of California (PPIC) recently released a study entitled “Californians & the environment.” The study evaluated Californians’ perspective on a wide array of issues related to the environment, including presidential politics, global warming, energy policy, and hydraulic fracturing, or “fracking.” It provides interesting insights on public awareness of, and attitudes about, fracking in California.

The PPIC study reveals that just 54% of Californians know “a lot” (23%) or “a little” (31%) about fracking. A full 46% acknowledged knowing “nothing at all” about the issue. Thus, despite widespread media attention on the topic in California, particularly in the wake of a series of fracking workshops conducted by the Department of Conservation (DOC) and its Division of Oil, Gas & Geothermal Resources (DOG), public awareness is sorely lacking. Likely voters are somewhat better informed about fracking, with 70% claiming some level of knowledge. The party affiliation analysis suggests that Republicans are the most aware of fracking generally (70%), trailed by Independents (60%) and Democrats (59%), although Independents had the highest percentage of respondents in the “a lot” category (33%). The data compiled by the PPIC is summarized in the table immediately below. (Source: PPIC study, at 23.)

The PPIC study also evaluated Californians’ attitudes toward fracking. Among the 54% of Californians who expressed knowledge of the oil and gas drilling practice, the study revealed a nearly even split, with 42% of Californians in favor of fracking, 46% opposed, and 12% who don’t know. The party line split is quite pronounced. Democrats strongly disfavor fracking, with 65% opposed and only 22% in favor. Independents are also generally against the practice, with 49% opposed and 35% in favor. Republicans represent the mirror image of Democrats in their attitudes, with 64% favoring fracking and only 22% against it. The major metropolitan areas of California – the San Francisco Bay Area and Los Angeles – generally oppose fracking, while the oil-rich Central Valley and other regions of Southern California generally favor the practice. The data compiled by the PPIC is summarized in the table immediately below. (Source: PPIC study, at 23.) 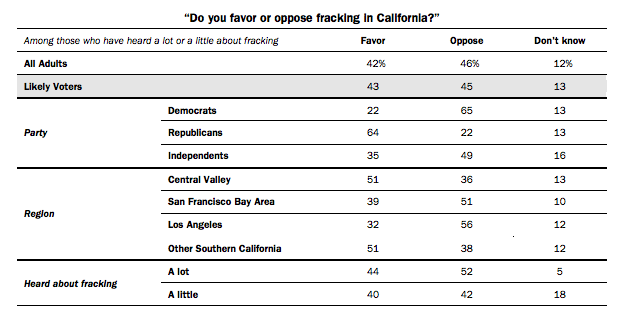 It will be interesting to follow these trends, particularly as public awareness of fracking increases here on the west coast. With over 17 million Californians seemingly unaware of this divisive issue, the political and environmental battle to sway public opinion will undoubtedly continue to rage.