On December 21, 2012, the Environmental Protection Agency (EPA) released a progress report (pdf) on its ongoing study of the potential effects of hydraulic fracturing, or “fracking,” on the nation’s drinking water resources.

In its announcement of the release of the progress report, EPA acknowledged that natural gas will continue to form an important part of the nation’s energy policy, but also recognized the need to act responsibly in the use of fracking to develop this natural resource:

As the administration and EPA has made clear, natural gas has a central role to play in our energy future, and this important domestic fuel source has extensive economic, energy security, and environmental benefits. The study EPA is currently undertaking is part of EPA’s focus to ensure that as the Administration continues to work to expand production of this important domestic resource safely and responsibly.

The progress report provides an update on EPA’s Plan to Study the Potential Impacts of Hydraulic Fracturing on Drinking Water Resources (pdf), released in November 2011. We reported on EPA’s final study plan here. The purpose of EPA’s study plan is

EPA’s study plan focuses on five stages of the fracking water cycle (see Figure 1 from the progress report, below), each with an associated primary research question, as follows: 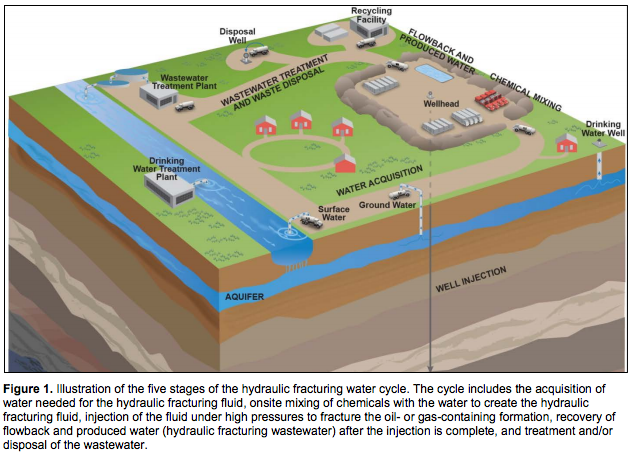 The progress report identifies potential drinking supply issues associated with each of the five stages of the fracking water cycle, depicted on Figure 2 of the report:

The progress report also describes 18 research projects (see Table 1 from the progress report, below) currently underway to answer these research questions, and presents EPA’s progress toward answering the questions as of September 2012. The projects are detailed in Chapters 3 through 7 of the report. No final conclusions on the potential impacts of fracking on drinking water supplies are reached. 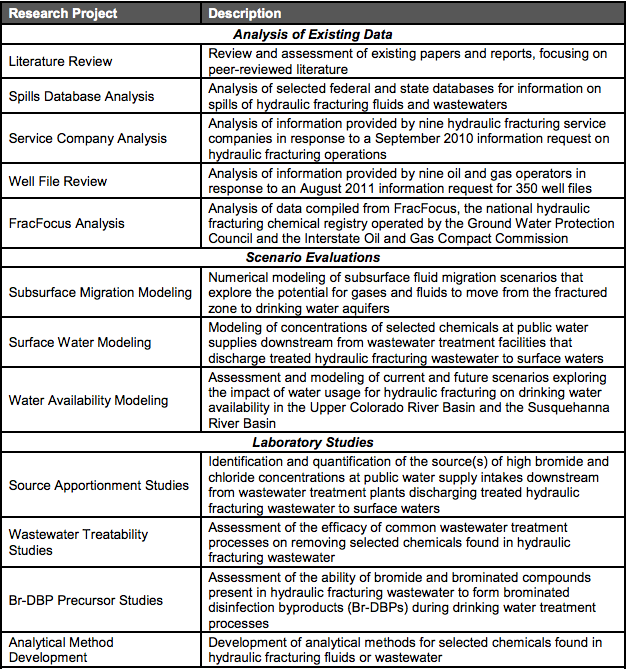 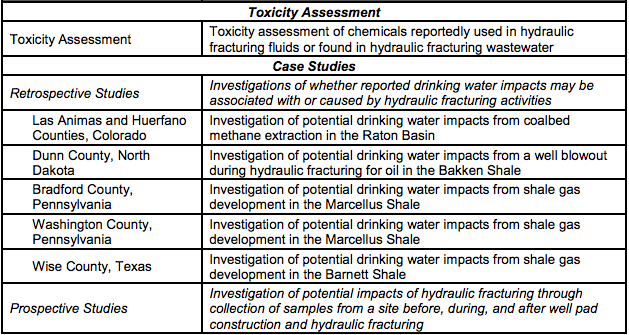 In conjunction with the release of the progress report, EPA will be hosting a one-hour public webinar on Thursday, January 3rd, 2013, at 11:00am PST, and again on Friday, January 4th, 2013, at 9:00am PST. The webinar will provide project-specific updates that include research approach, status, and next steps. The webinar will also provide updates on five technical roundtables held in November 2012. Registration instructions for the webinars may be found here. We will participate in the webinar and provide updates here on the blog as warranted.

EPA’s final report is expected to be released in late 2014. More information about EPA’s research on fracking may be found on its website.