California’s Fracking Regulations: What Happens Next?

On May 17, 2013, the California Department of Conservation (Conservation) and its Division of Oil, Gas & Geothermal Resources (DOGGR) issued the following update on the status of the draft regulations on hydraulic fracturing, or fracking, currently under development:

The California Department of Conservation and its Division of Oil, Gas, and Geothermal Resources conducted five workshops in 2013 to hear public comments on the “discussion draft” of hydraulic fracturing regulations prior to the start of the formal rulemaking process.  During 2012, seven workshops were held to gain public input on hydraulic fracturing. So, what happens next? All comments – including those given orally or in writing at the workshops, and electronically through the online comment links located on the Department’s and Division’s Web sites – will be taken into consideration as the process of developing the next draft of the regulations moves forward. Once the next draft and the required supporting documents are complete, the Department will begin the formal rulemaking process. These next steps in the rulemaking process are expected to take several months, and the public can continue to submit comments during this time via the Department and Division online links. There will also be an opportunity for public input during the formal rulemaking process.

In helping to answer the “what happens next” question, Conservation and DOGGR released a two-page summary of California’s rulemaking process. In brief summary, that process opens with the preparation of text of the regulations, a Notice of Proposed Action (NOPA), an Initial Statement of Reasons (ISOR), and a Fiscal Impact Statement (FIS), all of which must be submitted to the Office of Administrative Law (OAL) for review and approval. Once approved, OAL publishes the NOPA in the California Regulatory Notice Register (CRNR). The proposed regulations and supporting material will then be available on the Conservation/DOGGR website and a 45-day public comment period begins. A public hearing will be held. Conservation/DOGGR must then provide responses to all comments, whether written or oral, in its Final Statement of Reasons (FSOR). The FSOR must specify the changes made to the regulations to accommodate a given comment or provide an explanation why no changes were made. Depending on the extent of the comments and the scope of any changes to the regulations, the regulations may be submitted directly to OAL for final review and approval, or may be subjected to a further 15-day comment period or possibly a 45-day comment period. The entire rulemaking process must be completed within one year of the initial publication of the NOPA. 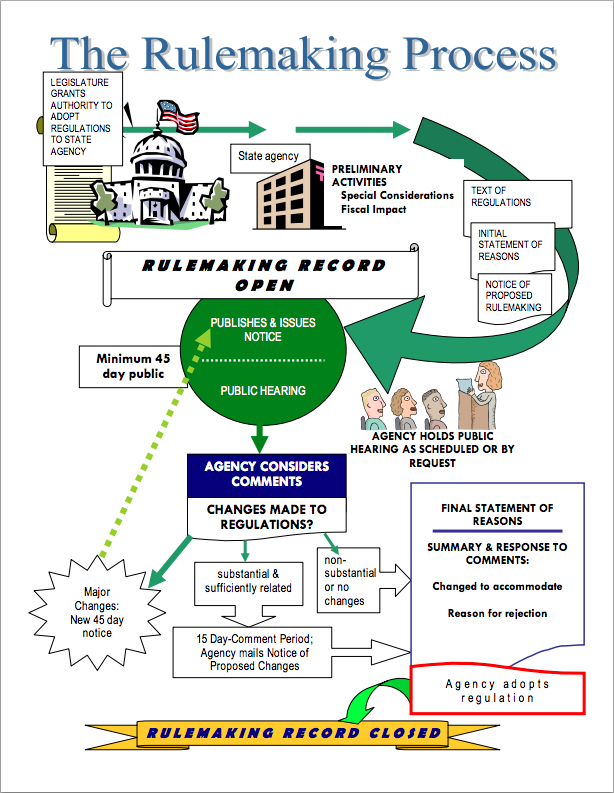 More detail regarding the OAL rulemaking process may be found here.

Conservation and DOGGR also provided a version of the “discussion draft” regulations cross-referenced with hyperlinks. That version may be found here.